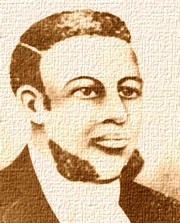 For My Suffering Race

“I have counted the cost and have sacrificed all my worldly possession to this undertaking. I am prepared to meet imprisonment or even death in carrying out the purposes of my heart.” Lott Carey said these words before leaving a life that was relatively prosperous for a black man of his time and sailing from Virginia to West Africa to serve as a missionary to his own people.

Lott Carey was born a slave in Virginia’s tobacco country in or about the year 1780 and, like his parents, was illiterate. It was common in those days for businesses to hire skilled slaves from their masters, and Carey was sent to work in a tobacco warehouse when he was a young man. In early adulthood he was inclined to profanity and drunkenness, but conversion to Christianity at age 27 changed his life profoundly. He married, joined the First Baptist Church of Richmond, learned to read so that he could experience the Bible for himself, and was soon licensed to preach.

Carey’s employers took notice of the changes in him and promoted him to shipping clerk, often giving him bonuses, which, along with a portion of his wages, he was allowed to keep for himself. His wife’s death in 1813 left him with two young children to raise, but he had been setting aside a portion of his pay and was able to purchase freedom for himself and his family that same year.

In 1815 Carey remarried and became minister of his own church in Richmond while continuing to work in the warehouse. He purchased a home, made an annual salary of $800, and was a respected citizen in his community. Carey’s grandmother, who had become a Christian after arriving in America as a slave, always believed that her grandson would someday preach the gospel in her homeland, and, despite his comfortable circumstances, Carey began to move steadily in this direction. He became a leader in the African Baptist Foreign Missionary Society, which was the first organization for world missions founded by African Americans in the United States, and was co-founder of the Richmond African Missionary Society.

Returning for the First Time

Despite his obvious interest in Africa, his employers were surprised when he announced in 1820 that he was resigning and sailing to the mission fields in Sierra Leone. They offered him a $200 annual increase to remain, but Carey did not allow himself to be tempted. His words, before leaving on the 44-day ocean voyage, resonated then as they do now: “I am an African,” he said in a parting sermon, “and, in this country, however meritorious my conduct and respectable my character, I cannot receive due to either. I wish to go to a country where I shall be estimated by my merits, not by my complexion, and I feel bound to labor for my suffering race.”

Carey’s second wife died shortly after their arrival, and in 1822 he moved with his children from Sierra Leone to Liberia, an adjacent colony which had just been established for the repatriation of American slaves who had purchased their freedom or had otherwise been emancipated. He built the colony’s first church and ministered not only to these freed blacks from America but also to members of outlying native tribes, some of whom walked nearly 100 miles to attend services.

Carey’s determination to “labor for his suffering race” was evidenced by his intense activity over the next few years. Besides preaching several times a week, he gave religious instruction to school age children and used his own personal funds to found a charity school in Monrovia and another in Cape Mount near Sierra Leone. The latter was fiercely opposed by Muslims of the Mandingo Tribe, but Carey persevered and was soon writing to friends in the United States to send 40 suits of clothes “as soon as practicable” so that native students at his new school would be properly attired.

Carey’s missionary career was marred in 1823 when he sided with insurgent Monrovian citizens dissatisfied with the American Colonization Society’s distribution of land to them. The conflict reached such proportions that an armed American ship was sent to quell it, and Carey was barred from preaching because of his involvement. He responded with humility, however, and kept up his mission work as well as the lay doctoring he had taken up when large numbers of arriving American blacks fell ill upon exposure to African diseases and climate. He soon reconciled with the Society’s leadership and became vice agent for the colony, in which position he was responsible for not only free blacks arriving from America but also Africans recaptured from auction blocks and slave ships.

When Liberia’s chief colonial agent returned to America in early 1828, Carey was effectively in charge of the settlement. Morale in the colony was running high, new schools were being established, and Christianity was flourishing. Carey was being considered for appointment as chief agent when he was mortally wounded in a munitions explosion and died on November 10 that same year.

Today the Lott Carey Foreign Mission Convention, founded in his memory, operates in Liberia, Haiti, India, Jamaica, and South Africa, equipping converted Christians within those countries to minister to their own people in the areas of child development, health, and education.